A $40 million renovation is transforming a landmark hotel in New York’s theater district. The Paramount Hotel was initially constructed in 1928, and while its original design isn’t completely changing, the hotel is being updated for the modern traveler. The transformation encompasses the historic hotel’s two-story lobby and its 597 guest rooms that overlook Times Square. It also adds new dining outlets and contemporary event spaces. The renovation is “a modern take on the original theater district icon 85 years later,” says Patrick Hall, vice president of hotel operations for RFR Holding LLC, the hotel’s owner. “Our team has embraced the lively, social atmosphere that made the historic hotel a must-stop in Midtown Manhattan.”

The two-story lobby is central to the hotel’s transformation. Inspired by the original architect’s lavishly decorated theaters, many of which have oversized elements and dramatic light fixtures, the lobby is redesigned with dark woods, chandeliers, and furniture in shades of blues and reds with pops of yellow. The lobby fireplace is framed by stainless steel, reflecting the room’s light, and a DJ booth provides an area for live entertainment. Paramount’s guest rooms and suites still have their original charm but are updated with a minimalist, contemporary design featuring flat-screen TVs and iPod docking stations. Two loft-inspired entertainment suites also have modern furnishings and a minimalist design.

Paramount’s four mezzanine-level event spaces were redone to allow ideas to flow freely. Aptly named Think Tank, Brain Trust, Inner Circle, and Ivory Tower, the four rooms can be combined with the mezzanine to accommodate up to 200 people. Groups can also use the new Paramount Bar and Grill, which has an 86-seat dining room.

The hotel has finished renovations on the lobby, guest rooms, event space, and restaurants. It will be fully completed when Billy Rose’s Diamond Horseshoe, a legendary nightclub from the 1920s, re-opens this fall. 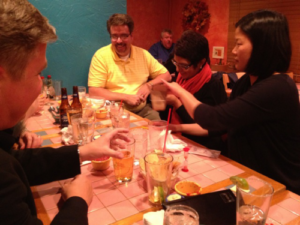 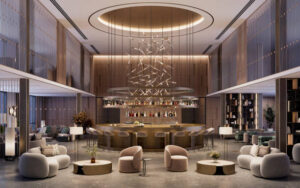